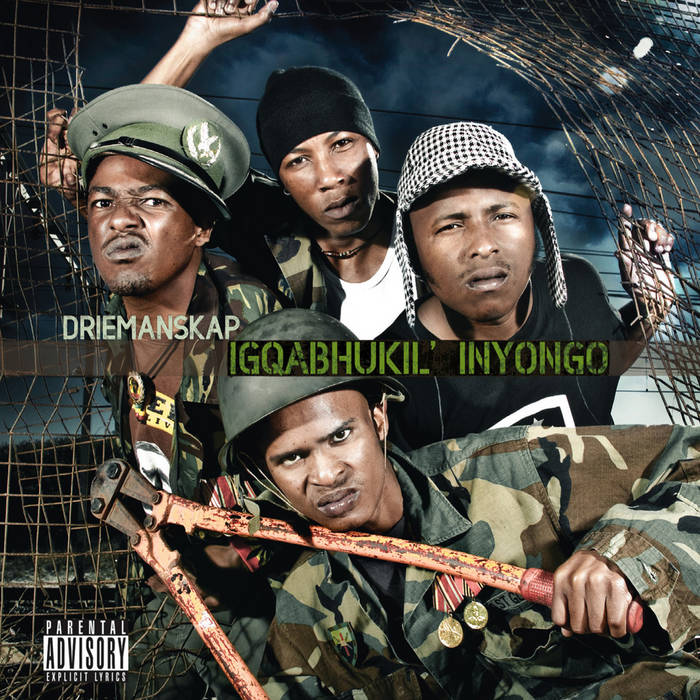 South African hip hop is about to change forever. An epic, earth-rending collision of two cultures coming together, Driemanskap embody the best socially conscious, cutting edge lyricsm of Cape Town, and the passion and deeply felt African pride of the Spaza movement. The result is a hip hop supernova, the shockwave of which will be felt across Mzanzi and beyond.

Hailing from Guguletu’s notorious KYD hood, Driemanskap members Redondo, El Nino, Ma-B and Dla are 4 of the most distinctive, real, unique and talented voices ever to come from the ghettos of the Cape Flats.

Driemanskap cut their teeth at park jams, cyphers, battles and shows for more than 7 years, establishing the beginnings of a cult following in South Africa. In 2005 they took part in the Baobab Festival where they opened for the legendary New York hip hop crew Dead Prez. Anyone who was there that night will tell you that Driemanskap stole the show! They also took part in the 2006 Tri-Continental Festival, warming up the stage for one the New York’s illest freestylers, Wordsworth, the UK’s Jonzi D and Ben Sharpa. They drove the crowd wild at Back to the City in 2008.

Like many ghetto youth, Driemanskap have been exposed to hardships and frustrations. Their unshakeable desire to prevail has turned adversity into success. Their debut album has been a long time coming and Driemanskap have used Igqabhukil’ Inyongo to vent many years of pent-up frustration, passion, creativity and raw energy.

Translated literally from isiXhosa, Igqabhukil’ Inyongo means ‘the gall bladder bursts’. However, it is a common expression that loosely translates as, ‘things are about to get crazy’ and there’s no false advertising here!

On Igqabhukil’ Inyongo Driemanskap draw inspiration not only from street life in the ghettos of the Cape Flats, they also delve deep into traditional African culture. The album contains moving songs with universal themes of hope, love and the importance of home and family. It also addresses African unity, the determination to stay strong through adversity and Driemanskap’s commitment to their art. The vocal dexterity, fearsome passion and street-hardened lyricism with which Driemanskap deliver each track paints a vivid and moving portrait of kasi life.

There are guest features by Kanyi (fresh from rocking the Cape Town Jazz Festival with Rus Nerwich), Black Dillinger (making waves in the international Reggae scene), Siya, Sugar, Macho and Bizzah. Guguletu is definitely in the house!

The gall bladder has burst - and things will never be the same.

Bandcamp Daily  your guide to the world of Bandcamp